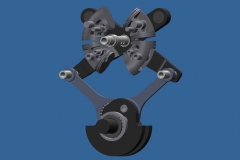 A two-stroke engine has many advantages and a number of manufacturers are developing a two-stroke engine currently. The main advantage is higher specific power output, smaller dimensions and weight, higher mechanical efficiency etc.

The main problem of a two-stroke engine is lubrication of pistons and leakage of oil into the exhaust pipe. Multi-valve engine variant without piston controlled ports can solve this problem.

Such an engine is very similar to a four-stroke engine regarding design. Worse cylinder scavenging and higher leakage of mixture/air into the exhaust pipe is a disadvantage. Further the valve gear is very stressed due to double revolutions of camshaft and this is connected even with mechanical losses. Due to this fact, the whole construction is neither simple nor considerably advantageous in comparison with a four-stroke engine. It is an unsuitable solution for spark ign. engines. It is useable for a diesel engine that works with air excess. In addition to that it works in low rpm,where the stress of valve gear is acceptable.

Due to development of injection systems, it is presumable that mixture formation at a spark ignition two-stroke engine won’t be an obstacle for their future possible expansion. There is a problem with air excess and use of three-way catalyst at two-stroke spark ignition engines with direct injection of fuel. This problem can be solved by very good scavenging, by deNOx catalyst etc. Use of natural gas seems to be perspective. Precondition for that is a direct injection of gas into the cylinder. But the main problem – piston lubrication and leakage of oil into the exhaust pipe stays.

Our project is in a conceptual design phase. It deals with an internal combustion engine with swinging movement of pistons, composed of chamber in a shape of toroid, where two pairs of swinging piston are placed, which are connected by means of lever with two connecting rods, which are fitted on the crankshaft. Always two opposite piston are firmly connected by means of piston pins, which come through the toroid wall. The levers are situated along the sides of toroid chamber and seated in axes of toroid on another pin. Engine has four combustion chambers between four pistons. The air would be delivered by suitable charger.

The advantage is that pistons do not need lubrication, because they are not kept by the wall of the toroid, but by levers seated in roller bearings. Pistons have low strokes, therefore lower friction velocities of piston rings. A requirement on lubrication by use of suitable material is minimal. All bearings can be roller-type with minimal requirements on lubrication. It is possible to lubricate crankshaft bearings separately. Oil consumption is lower than by Wankel engine. On the piston skirt, there will not be friction losses and that will lead to lower mechanical losses.

The Forces acting the connecting rods will be acceptable, although the rods will actuate pair of piston with levers with quite big mass. Connecting rods are seated on double radius than radius, where pistons are seated. Inertial forces acting the connecting rod are acceptable too due to the low stroke of pistons and reduction of inertial masses to the radius of connecting rod pin on lever. Pressure and inertia forces are acting against each other and are lowering the amplitude of result forces on connecting rods when the engine is running. Another advantage of this engine is the timing, because the exhaust port closes before closing the intake port and it allows good charging and supercharging. An advantage is a relatively good balancing of the engine. It is possible to balance rotating and swinging mass separately. Only difference between moment of inertia of swinging masses will be unbalanced. It is caused by phase shift of movement of swinging pistons, which is necessary for suitable timing. That can be satisfyingly balanced by means of one balance shaft with one balance mass and second mass would be on crankshaft.

Cylinder displacement: 870 cm3;
charging by volume compressor with low pressure ratio
Outer dimensions: 480 x 340 x 300mm;
Weight: 42kg without compressor and accessories;
Power: about 120 HP at 5000 rpm;
Use: e.g. in ultralight planes or in motorcycle; in case of solving direct injection with perfect mixture formation (e.g. mixture of natural gas) and solving all emission requirements, there is a possibility of use in cars; 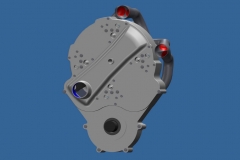 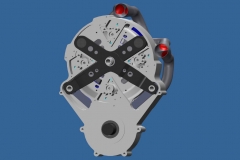 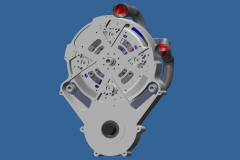 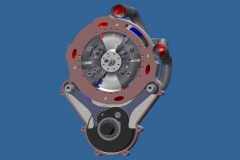 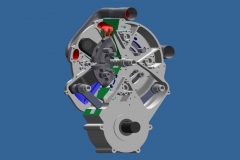 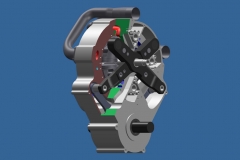 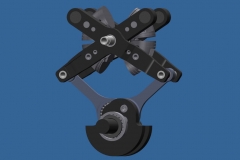 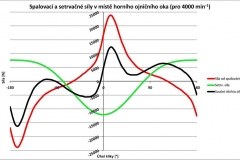