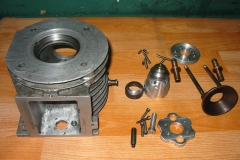 That is a principal revolutionary change of the classic traditional four-stroke cycle of an internal combustion engine. It is enabled by interconnecting the intake port with the exhaust port in the cylinder head and by tuning of entire valve system and piping of the engine. Briefly: The difference in function between the multi-cylinder engine according to the invention and the classic four-stroke cycle is in intensive scavenging of the cylinder head at the end of the exhaust stroke; further suction of air in addition to the cylinder in the exhaust pipe and subsequent refilling of air into the cylinder. Described effect can be achieved by two- or three- cooperating cylinders of an engine or their multiples. Part of pressure exhaust wave is used directly for compression of intake gas, so that higher level of cylinder filling can be reached substantially. That causes higher brake mean effective pressure and higher brake efficiency. Naturally aspirated variant of this engine according to the invention has very good parameters in a relatively narrow RPM range for one configuration (it means valve timing and piping dimensions). It doesn’t have to be a disadvantage to use this engine like a generator. In comparison with the traditional four-stroke engine of the same dimensions and performance the absence of a turbocharger can be an advantage as well as the absence of the turboeffect which causes lag in reaching full performance. Four-stroke internal combustion engine according to the invention in a turbocharged version reaches vehicle characteristic with excellent parameters in the entire RPM range and is useable in present-day cars. We are currently preparing construction of a four-cylinder compression ignition engine, on which we want to verify whole design of the cylinder head. We want to test various configuration of exhaust systems, with and without a turbocharger.